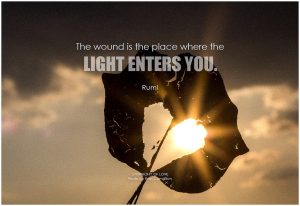 For the past two and a half months, I’ve been looking back at the Facebook Live videos I did when I first went on bed rest.  Knowing they would start in early September, I was dreading seeing them because it was a reminder of how long I had been out of commission.

But when the Facebook Memories began to pop up, I ultimately had a different reaction.  Rather than lamenting how long I had been laid up, I saw how far I had come in my healing journey.

At first, looking at the videos was painful.  I had let myself go for so many years … decades, really.  I had allowed myself to get caught in such a huge spiral of shame over how unhealthy I was that I just continued to let myself go.  The memories of the shame and my behavior make me cringe:

The ultimate shame was letting my health get so bad that it took an extra hole in my behind to wake me up and make the changes that would get me healthy.  Why did I let things get so bad?  That’s a question I am still working on answering.  I’m not there yet, but I’ll get there.  So you’ll probably see more blog posts on this topic and I hope my insights are helpful.  I hope all the entries in this blog are helping you, InspiraGang.

For now, here’s what’s changed following the switch to healthy habits and the subsequent weight loss:

I am healthier than I have ever been, not in spite of my wound, but because of it.  Like the Rumi quote above, the wound let the light in and I saw it, accepted it and it helped heal me.  For that, I am eternally grateful.